There are few meals more comforting than the humble jacket potato, which works just as well as a warming lunchtime treat as it does an easy telly dinner – and when they’re good, they’re really good.

I myself have only ever enjoyed a precious few 10/10 baked potatoes in my time, but continue to seek out the ideal balance of crispy skin and velvety mash every single time.

With this in mind, I decided to try out four popular baked potato methods, to see which was the cheapest to make – and which would taste the best.

I usually opt for a large baking potato, smothering this with olive oil and crunchy sea salt after inflicting a few deep fork jabs. I then pop the oven timer on for around one hour and ten minutes, wrapped in a firm layer of tinfoil.

Get the news you want straight to your inbox. Sign up for a Mirror newsletter here.

Now, I’ve recently been told that my tinfoil use is practically sacrilege, giving the skin a bland, steamed texture and the overall dreary feel of being boiled.

Curious about how to elevate my jacket potato, I tested out four popular approaches: baked with tinfoil, baked without tinfoil, boiled then baked, and – gasp – zapped in the microwave.

The potatoes came from the exact same 39p packet from Morrisons, with each one filled with an identical, and unbeatable, filling of butter, cheddar, sour cream, and a splash of Tabasco.

The differences at the end were pretty remarkable.

I was surprised by the clear differences between the four
(

Zapped in the microwave

Advice varies from seven to 12 minutes, with some suggesting flipping it halfway through. I was initially dubious but was pleasantly surprised to find it had cooked right through after just eight minutes on high.

I cut into my zapped tatty with ease, but it wasn’t quite fluffy enough for my personal liking and so I gave it an extra couple of minutes before tucking in.

Thankfully, it was piping hot right the way through, although not quite as crispy on the outside as I would have hoped.

It also wasn’t quite as cotton-candy soft as I dug deeper in, where the flesh was a bit firmer but not noticeably so. Still, this was more than ideal for a quick lunch on the go, and I gobbled down every time-saving bite.

As per figures from the Sust-it’s microwave oven electricity cost calculator, it costs just over 5p to zap a spud in the micro for ten minutes, making this a more energy-efficient approach.

I didn’t have much faith in the micro method, but was happily proven wrong
(

Many baked potato enthusiasts swear by this method, claiming that it helps loosen the skin, bringing out a satisfying crispness unlike any other.

For this one, I followed the wisdom of food blogger The Foodie Patootie, who shared a boiled baked potatoes recipe all the way back in 2014 for National Potato Day.

After 10 minutes of boiling, I popped my potato in the oven at 220 degrees, adding extra seasoning after ten minutes. By this point, it had darkened considerably when compared to the others, and I naturally assumed it would cook through quite rapidly.

However, after another 20 minutes had passed, I was surprised by how just how tough it was to cut into, so chucked it back in the oven for ten minutes, then another ten.

Various recipes suggest between 20 to 40 minutes, and I’d say go for a longer if possible. Mine was nowhere near fluffy after a good few extra rounds in the oven, although the skin did crisp up nicely and vigorous mashing and plenty of butter softened it up somewhat.

Plenty of people rave about the boiled first approach, but – personally – I couldn’t taste any particular benefits and just found myself facing a bit more washing up.

On average, it costs around 4p to 8.5p to use a hob for ten minutes, and about 50p to use the oven for half an hour. This is of course before you even factor in boiling the kettle, which could cost as much as 42p per boil for a 3kW kettle.

Wrapped in a little tinfoil coat

For this one, I used my old tried-and-tested approach, whacking it in a pre-heated oven for an hour and ten, and lowering the temperature slightly after half an hour.

Now, this was a perfectly okay jacket, but when eaten beside the one I’d shoved in bare as the day it was dug up, it stood no chance. This was a much paler, harder spud than the no tinfoil option, and lacked the same subtle, yet distinctive, flavours.

In short, it was by no means the worst baked potato I’ve ever had, but it didn’t have me smacking my lips, and it didn’t rate particularly highly in terms of fluffiness or crispiness.

Unfortunately, according to engineer and inventor, Robert Mackay, who works in the field of renewable energy, “there is no cheap way to cook a jacket potato”, with the answer being “to cook as many as the oven will hold (50)”.

A cooking time of 1 hour 15 mins will see you spend about £1 and so, although you may well not be able to stomach 50 potatoes, it’s worth considering popping everyone’s tatties on at once.

The tinfoil wrapped spud was okay, but nothing special
(

Although I went for my trusted old timings, I found this to be significantly darker, crispier than the tinfoil version, and far more special.

The flesh gave beautifully beneath my fork, like a plane passing through a cloud. It was fluffy in a dream potato sort of way, a feathery, flavourful jacket that I could have enjoyed with or without toppings. Pure bliss, and truly heavenly.

This superior spud was the tummy equivalent of being wrapped up in my snuggliest blanket, slippers on, and beloved pet on my lap. I will be leaving my tinfoil in the drawer going forward.

This, again, cost just over £1 to bake to perfection.

The no-tinfoil option was the best by far
(

The boiled then baked method, unfortunately, left me with a cold, bland, fiddly, and far less satisfying baked potato than the others – and it wasn’t particularly cheap to do.

Surprisingly, the purse-friendly micro-zapped potato was the second-best of the bunch, surpassing my previously trusty tinfoil option in both flavour and texture. Clearly, I’ve been making a big mistake for years.

Do you have a top cooking tip to share? We want to hear all about it. Email us at [email protected]

‘I tested five different brands of teas – the worst one surprised me’
‘I tried sushi cereal – it wasn’t awful, but I couldn’t stomach it every morning’
Next Post

Tue Apr 12 , 2022
WAUSAU, Wis. (WSAW) – Pupils finding out culinary arts at North Central Complex University are tests out techniques to run their own restaurant. With the enable of the campus’ restaurant “Spoons,” students get to make up their own menus and ideas to see how effective they could be in the […] 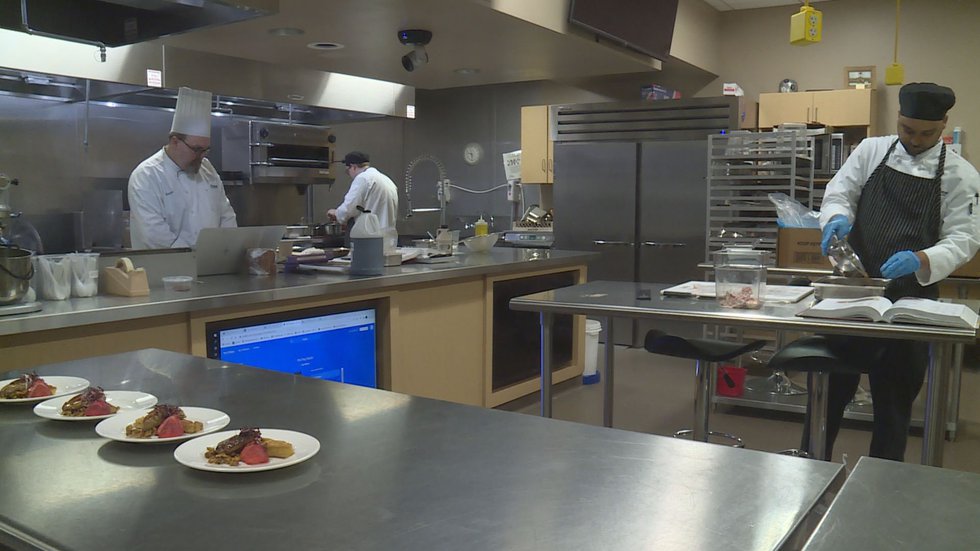